Today’s post is part one in a series about the realities of business, or, what reality TV shows can teach us about business. Up next week: The Real Housewives! But first, let’s take a look at Celebrity Apprentice, shall we?

Clearly, Donald Trump knows a thing or two about living well and achieving success in business, so what better show to remind us of what’s important in life and business than Celebrity Apprentice? We’ve been glued to the TV this season, and it’s no wonder why: it’s been riveting and we’re left with so much to think about by the end of each episode. Even though the show never disappoints, we have to admit we’re a little bummed out that there wasn’t a big hair pulling cat fight between Victoria Gotti and Teresa Giudice. That would have been EPIC.

Oh well, we guess we’ll just have to settle for some plain old life lessons…

We were not shocked at all when Lou Ferrigno did NOT give 110% and was fired for backstabbing his teammates. We saw that coming a mile away because he just didn’t seem to understand what it meant to be a valuable member of a team. When he wasn’t project manager, he just sat there contributing bad ideas and letting the rest of the team carry his weight. Dee Snider agreed in his exit interview, having this to say about Lou:

“He’s a performer and all that he ever wants to do is either be The Hulk, flex his muscles, or be on the camera on stage. That’s a great place to be. But in these tasks there are so many other jobs that require talent and other abilities. Everybody just went and carried Lou to help him because they kind of felt bad for him. The rest of the guys have to stop feeling bad for him and get rid of him. He’s poison.”

Not cool, man. His disloyalty to his team made TRUMP ANGRY! And he got FIYAHD! Get ready for that elevator ride, Lou! 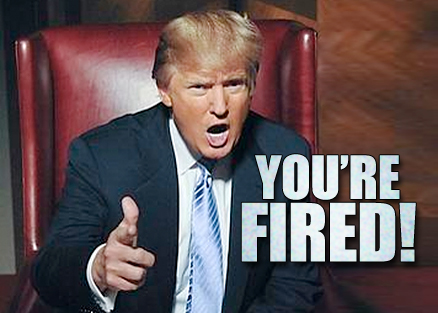 Lesson? No matter what, if you’re a part of a team and the team doesn’t do well, you are also responsible for that failure. End of story.

Knowing when to step aside

The thing that bugs us about Aubrey O’Day is that she can’t get out of her own way. She puts words in people’s mouths, she’s always covering her own butt, and she has to be number one all the time. But perhaps the biggest offense Aubrey commits is that she doesn’t know when to pipe down. Ivanka Trump totally called her out on that too saying, “you are very polarizing ... You tend to speak more often than the person who maybe should be speaking. I think that's really the thing that alienates the rest of your team."

It’s really important to know when to step aside and NOT be the boss. But we can’t be too hard on Aubrey, after all everyone has his or her strengths and weaknesses. This past week, she seems to have taken Ivanka’s words to heart. There may be hope for Aubrey still!

Lisa Lampanelli is similar in that she always feels like she’s got to do all the work and that nobody else is doing anything. Lisa and Aubrey have really strong personalities, which can (and does) make them both hard to work with. If they could just learn to tone it down a little and recognize that others have something great to contribute too, it would be easier for everyone. Between Aubrey’s diva behavior and Lisa always martyring herself, it’s amazing they’ve both lasted as long as they have.

So few people are able to do this, but it’s so valuable in life and in business. Paul Teutul Sr. from American Choppers is a man of few words, but when he does say something, its important. It’s so rare to meet someone who is calm and self possessed enough to sit back and observe a situation, formulate an intelligent response to it, and then act on it.

So many of us tend to be reactive to things, taking a “Ready? FIRE! Aim!” approach to life. If we actually tried to slow down a little bit and think first, we’d make much smarter decisions. Paul’s ability to hang back until he is really ready to make a statement reinforces his presence as a decision maker.  Sadly though, even quiet decision makers aren’t perfect and poor Paul got the boot this week.

If you fall off your horse, get back on!

Poor Dee Snider broke his finger when he fell off a horse and got it caught in the saddle. Anyone who’s ever broken a finger knows how much that hurts, but despite medical advice, Dee refused to withdraw from the task and carried out his role in the show.

Speak to successful people and the single largest factor they list as a contributor to their success is “perseverance.” It takes courage to attack a task again and again despite having the odds stacked against you!

Why Clay Aiken is going to win

Everyone thought Clay Aiken would be invisible, but check this guy out!  He’s hangin’ in there, and if our predictions are right, he’s going to win this thing!  He’s good at conflict resolution, he sees the best in people, he knows exactly when to lead and when to step aside, and he’s a great team player. He even did puppets for church people! He has all the great qualities we think The Donald is looking for. Sure, there are more aggressive people on the show, but in the end, you have to use your head and that’s exactly what he seems to be doing.

Anyone care to make it interesting?

We bet you a free website that Aiken wins this thing.