When they’re not busy ripping out each other’s hair extensions, flipping tables and planning disturbingly expensive weddings, there are a few nuggets of business wisdom that can be gleaned from watching the Real Housewives on their reality TV shows.

Some of the housewives have actually become their own brands, proving that not all of these ladies are the vapid, cat fighting creatures we have come to know and, um, love. Of course, the producers of the shows are compelled to sprinkle in the crazy for entertainment value, but the smart ladies use the media attention as a giant PR platform (Camille Grammer, anyone?).

Even for those housewives who aren’t selling something material, there is a marketing agenda: creating value for themselves. A successful housewife is secure that she provides something valuable for her husband. Retaining exclusivity and a certain cache is critical. In fact, some of the housewives have leveraged this to such an extent that they seem to be Veblen goods . Conspicuous consumption and being envied is absolutely a part of this game!

Solve your own problems, launch a national brand

Can’t find a product or a service you like? Chances are, somebody else has the same problem, and that can be the key to a successful business. This is something the Real Housewives know all about!  Adrienne designs her own line of shoes, Gretchen has a line of cosmetics and handbags, and Kim has her, er, um “singing career.” (We’re really sorry if you clicked that link.) But perhaps the most outstanding example of a housewife who has turned herself into a national brand is Bethenny Frankel. 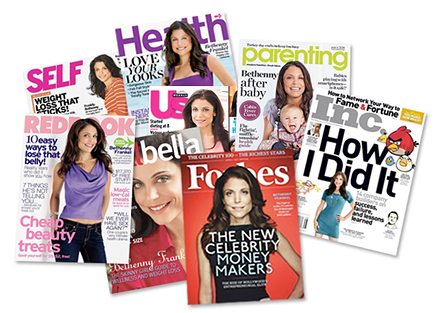 Frankel was one of the original five housewives on The Real Housewives of New York City, and stayed on the show for the first three seasons. Later, having made herself a household name (in large part due to appearing on the show), she went on to launch her own brand of low calorie cocktails called Skinnygirl. Frankel and Skinnygirl became synonymous with one another—making her fans highly likely to buy her cocktails. She later sold that cocktail line for an alleged $120 million dollars.

But what started all of this success for Bethenny?  Well, she was always a go-getter, but the idea to start Skinnygirl came when she couldn’t find a low calorie cocktail that wasn’t loaded with artificial flavors. She solved her own problem, took advantage of her celebrity, and now she’s a gajillionairess. Cheers!

The socializing at various events and parties that the housewives do isn’t just for fun—it’s actually a very potent form of networking (just so long as you don’t end the evening throwing a drink in someone’s face). Making connections with other business people is critical to success, no matter what you do for a living. Also, being aware of the connections between others in your industry is important. It’s always good to know who’s in bed with whom whether you’re a social climbing “housewife” or just a guy who sells wieners at baseball games. So, find events to go to, do charity work; whatever you can do to get yourself rubbing elbows with people is a great business move.

So even if you’re tired or you have a pimple, put on your networking hat and show up for stuff.

Who knows, you might meet someone and fall in love…

Many (but not all) of the housewives seem to have amassed much of their fortunes via marriage—specifically to rich and often powerful dudes. Marriage is certainly one of the oldest and strongest bonds of partnership and has frequently been used as a business tool over the centuries. The Real Housewives of 2012 are no different.

Now, we’re not telling y’all to out and get hitched, but we are saying that forming partnerships and alliances with other people can be a pretty solid and mutually beneficial business move. Not only will you enjoy the benefits of your relationship with your allies, but you’ll also be exposed to their network of friends and even more potential relationships. Of course the advantages of pooling resources—especially financial resources—can’t be overstated.

Regardless of some of the infamous behavior we’ve all heard about, these ladies have all clearly been doing at least a few things right. Through problem solving, networking, creating alliances, and the occasional demonstration of tact, discretion, and diplomacy, they’ve all managed to climb (or claw) their way to the top!  These are traits that all successful entrepreneurs exhibit.